About two years ago I announced Winbindex - the Windows Binaries Index. I described how I downloaded all the Windows 10 update packages I could find, and how, with the help of VirusTotal, I was able to generate download links for the files from the update packages that were submitted to the service. If you didn’t read the announcement blog post, I suggest you read it for the motivation behind the project and for the full technical details. Below is a quick recap, followed by the small updates Winbindex got during these two years. After bringing you up to date, I’ll tell you how I was able to generate download links for all files, even those that weren’t submitted to VirusTotal, and what are the limitations of the method I used.

The update files in an update package are divided to assemblies, each assembly having a manifest file and a folder with delta files (forward and reverse differentials). In my original research two years ago, I assumed that the delta files aren’t useful without the base files, so I focused on the manifest files. From the manifest files, I was able to get the SHA256 hash of the files that are part of each assembly. Then, I used the hash to search for each file in VirusTotal. If a file was submitted before, I could retrieve enough information to be able to generate a download link to the file in the Microsoft Symbol Server. When I did the initial indexing, 80.6% of the files were submitted, and these files could (and still can) be downloaded on Winbindex.

Since the announcement two years ago, Winbindex got a couple of updates:

A couple of weeks ago, slipstream/RoL contacted me and shared his DeltaDownloader project, suggesting that I might be interested. The DeltaDownloader tool is able to find Microsoft Symbol Server links for delta compressed PE files using just the information in the delta compression header. To see how it’s done, you can refer to the project’s README file. Here’s the technical part for your convenience:

The delta compression header for a PE file contains the following information:

PE files on the Microsoft symbols server are stored with keys of (OriginalFileName, TimeDateStamp, SizeOfImage).

The other can be determined from the size of the output file and the VirtualAddress/PointerToRawData of the last section:

Enough of the functionality of msdelta.dll has been reimplemented in C# to allow for obtaining the required values from the delta compression header.

It turns out that delta file headers contain a bunch of information, so delta files can be pretty useful even if the base files aren’t available. DeltaDownloader uses this information to generate a list of candidate URLs, and then tries them all against the Microsoft Symbol Server to filter out the invalid URLs.

This capability is a great addition for Winbindex. Although trying all candidate URLs is not feasible for the huge amount of indexed files, being able to get the list of candidate URLs right from Winbindex is a great improvement compared to what Winbindex had to offer for these files before (no links at all).

I updated the Winbindex scripts to use DeltaDownloader and grab the useful information from the delta files - the TimeDateStamp value and the (VirtualAddress, PointerToRawData) values for the last section. I also downloaded past update packages and updated existing indexed files with information from the delta files. Not all files could be updated this way - update packages for old Windows 10 versions (version 1803 and older) include the actual files instead of delta files, and many old update packages are no longer available in the Microsoft Update Catalog. But many newer files were updated successfully, and what’s more important, Winbindex will now gather this information automatically for new updates. 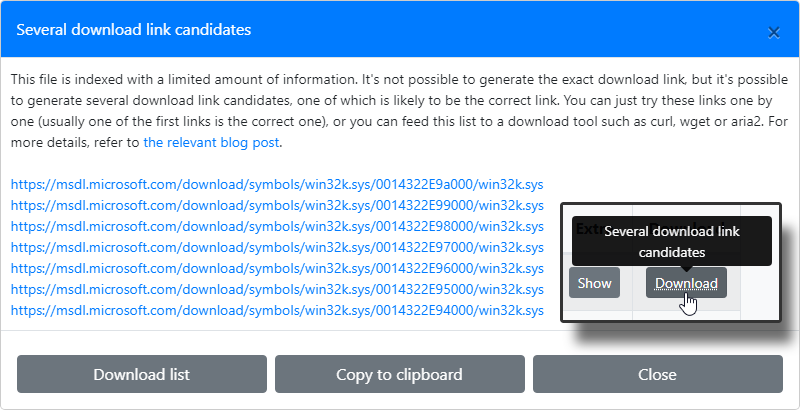 You can check out the result on the website, for example here for win32k.sys. Note how the files which don’t have a single download link have a hint on the download button, and clicking on it shows a list of candidate links. You can just try these links one by one (usually one of the first links is the correct one), or you can feed this list to a download tool such as curl, wget or aria2.