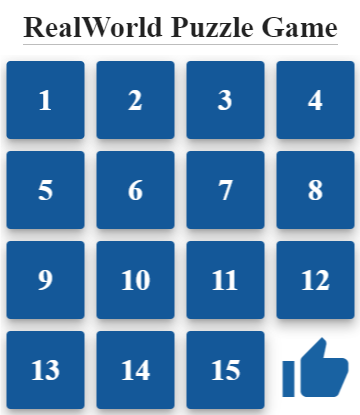 The given URL leads us to a classic sliding 15-puzzle with a nice material UI. At the bottom we see an “Auto Play” checkbox, and counters for the amount of moves and tiles left, all of which are not interesting for the challenge.

Looking at the source of the page, I saw a minimal HTML markup and a huge 1.5 MB JavaScript file. I quickly deduced that the JS file originated from Dart code, and the used framework is Flutter. The JS file is huge, minified and ugly, feels a bit like looking at assembly code. I didn’t find any “decompilers” for Dart or Flutter, so I moved on.

Trying to avoid the horror of the JS file, I moved to inspecting the HTTP traffic. The first API that is being used at page load is: /api/new_game?width=4&height=4, which returns the initial board state. To see what happens next, I replaced the response with an almost-finished board, then completed the game. What happened next is that I got the following message: “Invalid answer, you must be cheating!”. Fair enough, but now I know that the request is sent to: /api/verify, and includes the moves I made.

To proceed further, it looks like I need to solve the puzzle. Looking at several solvers around the internet, I finally used the 15418Project project, which was sufficiently fast and convenient. After solving the puzzle, I got a “Congratulations!” response from the server, along with a large base64-encoded binary blob. Mystery.

Back to the UI

Next I replaced both API responses (new_game and verify) to see how the UI proceeds once the puzzle is solved. What happens is that I’m asked to submit my name, and once I do that, a high score table is displayed. So what do I do now? Where’s the flag? All I had is that huge mysterious data blob.

Next thing I wanted to figure out is where that data blob is being used. Since the data blob came base64-encoded, I decided to put breakpoints on base64 decoding function candidates. I don’t remember how I found the relevant base64-decoding function, but it’s the one with the “Missing padding character” string inside it. In any case, once I stepped out of the base64-decoding function, I landed on a function which ends with a condition and the string “Congratulations again on you-know-what!”. That was a strong hint that the condition better be satisfied.

I won’t elaborate - you can look at the code - but the condition is satisfied only if the name you submitted is the flag :) It boils down to a systems of linear equations, which can be solved to get the desired name, which is the flag. I used numpy to solve it.

A quick and dirty script can be found here.