A couple of weeks ago, Windhawk, the customization marketplace for Windows programs, was released. You can read the announcement for more details and for the motivation behind creating it. In this post, I’ll focus on my journey in implementing the technical aspects of Windhawk. If you prefer reading code to reading text, check out the demo implementation.

Windhawk allows creating mods, which are C++ snippets that are compiled to DLLs and loaded in third party programs to customize them. The technical challenge is to be able to load these DLLs in the context of the required processes. For example, one can create a mod that hooks the MessageBoxW WinAPI function, and define that the mod should apply to all processes. 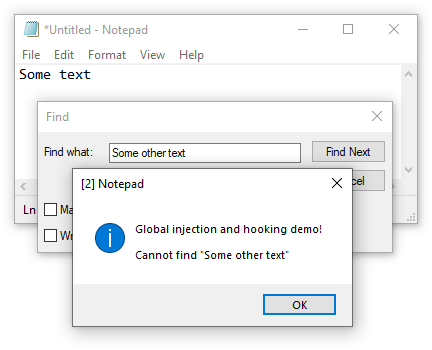 Windhawk implements a mod manager which is injected into all processes. Injecting a DLL into all processes is not a novel task, it has been done multiple times before by antiviruses, customization tools, and other programs. To the best of my knowledge, these are the most common approaches:

These were my goals for the global injection solution:

Also, it’s worth listing some of the non-goals for the solution:

Looking for the best approach

I started by looking for the approach that fits my goals best. Here’s a table which summarizes my findings (note that those are not yes/no criteria and the table is mostly a judgment call):

Out of the four approaches, the SetWindowsHookEx approach seemed to be the best fit, but it has its limitations which I hoped to avoid. Also, using SetWindowsHookEx felt like a misuse of a tool designed for different purposes as I must choose an event to get notified about, even if I don’t need any.

This approach looks rather obvious and simple to implement, but in practice there are various tricky details that have to be taken care of. I’ll go through them in this post. I’m sure this approach was implemented and used before, but I didn’t find a fully working implementation which I could use as a reference.

Injecting a DLL into a process

The injected code loads the DLL, achieving the required task.

This injection method is very old and well known, and there are many tutorials and examples for it on the internet, so I won’t elaborate further.

Injecting a DLL into all processes

At first glance, it seemed to be working nicely and looked pretty much complete. But upon a closer inspection and after some careful testing, I found that there are several limitations that have to be addressed.

Even when the injection program is running as administrator, and even when debug privilege is enabled, there are processes which are out of reach. Several core system processes in Windows are marked as Protected Processes, and as the name implies, they’re protected from tampering and the injection program can’t inject the DLL into them. That’s not a problem by itself, these processes are protected for a reason and I’m OK with not being able to fiddle with them. The real problem is that because they’re protected, CreateProcessInternalW is not hooked and there’s no opportunity to inject the DLL into processes created by protected processes, even if the created processes are not themselves protected. 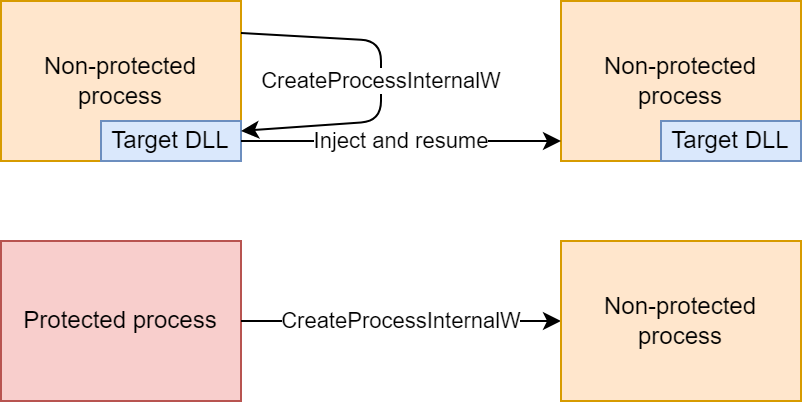 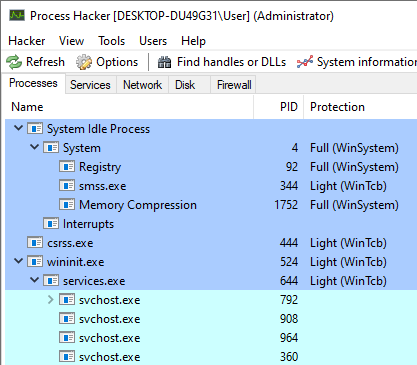 For example, in the screenshot below Windows Explorer was restarted via the Task Manager. The new explorer.exe process was created by winlogon.exe, which is elevated.

Another common example where an elevated process creates an unelevated process is when a process crashes. See the screenshot below from the presentation Exploiting Errors in Windows Error Reporting by Gal De Leon. In this case, the injection program misses the opportunity to inject the DLL into WerFault.exe which is unelevated. WerFault.exe may in turn restart the crashed program, and it will be missed as well. 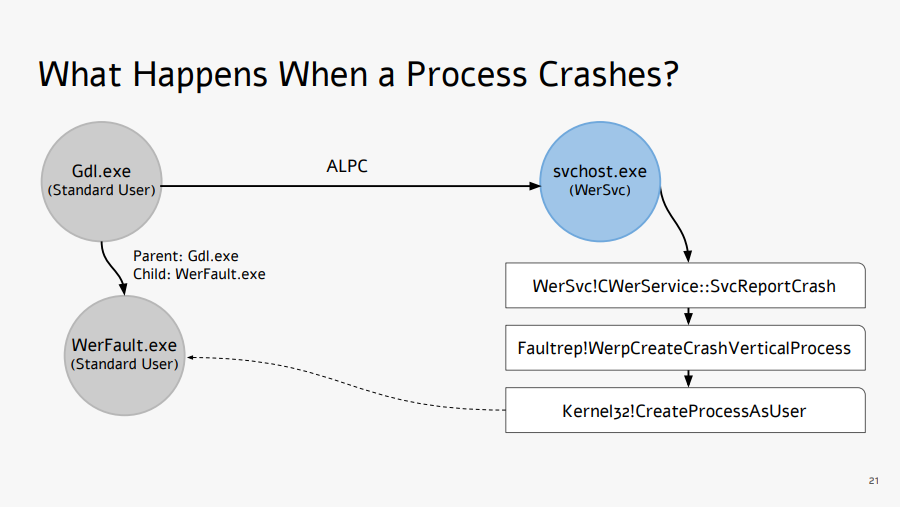 If the new process was created by an inaccessible process, the injection program injects the DLL, as depicted below.

If, on the other hand, the new process was created by a process with an injected DLL, there’s a race between the creating process and the injection program. I used a mutex to make sure only one of them injects the DLL, as depicted below. 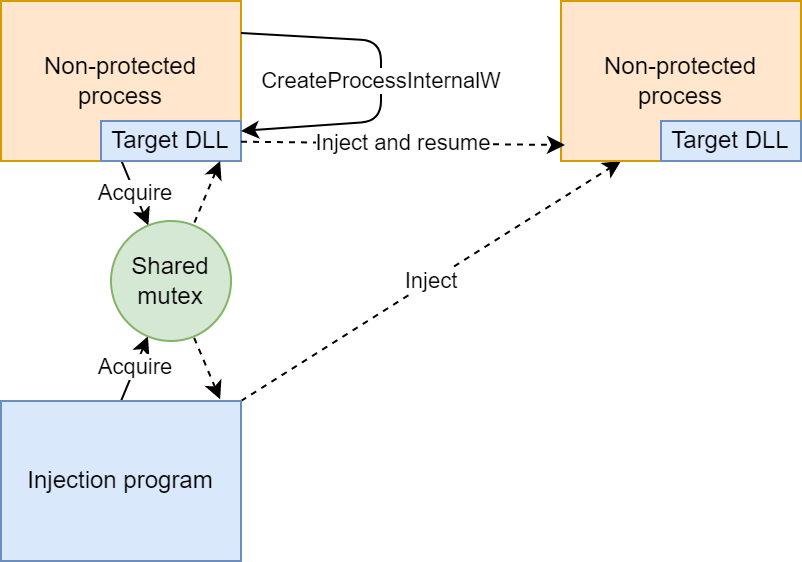 This approach works, but it has a serious drawback - if the new process is created by an inaccessible process, the DLL is injected asynchronously, possibly after the new process begins running, which might be too late depending on the customization use case. Unfortunately, I didn’t find a better solution, and because this problem is not very common (especially if the injection program is running as administrator), it’s not too bad.

Also, this solution created a new problem which is described below, which was happening when the injection program injected the DLL too early.

Too early injections that break stuff

After implementing the solution above, I noticed that sometimes, new processes failed to start. After a bit of investigation, I saw that it only happened with console programs. And after more investigation, I found the root cause.

All user mode threads begin their execution in the LdrInitializeThunk function. The first thread that a process runs performs process initialization tasks before the execution is transferred to the user-supplied thread entry point. One of the process initialization tasks is creating the console window in case the process is a console process. For more details about the LdrInitializeThunk function, check out this blog post by Ken Johnson.

Normally, a new process starts with a single, suspended thread. Then, the Client/Server Runtime Subsystem (csrss.exe) gets notified about the new process that was just created, and does its own handling. Finally, the suspended thread is resumed, the LdrInitializeThunk function performs process initialization tasks and transfers the execution to the process entry point.

With the injection program injecting the DLL too early, the new process starts with a single, suspended thread, as usual. But before the Client/Server Runtime Subsystem (csrss.exe) gets notified about it, the injection program creates a new thread in the new process which starts executing right away (marked with red in the image below). As the first running thread, it performs the process initialization tasks. Only then, csrss.exe gets notified about the new process, but it doesn’t expect the process to have an initialized console, and returns an error. 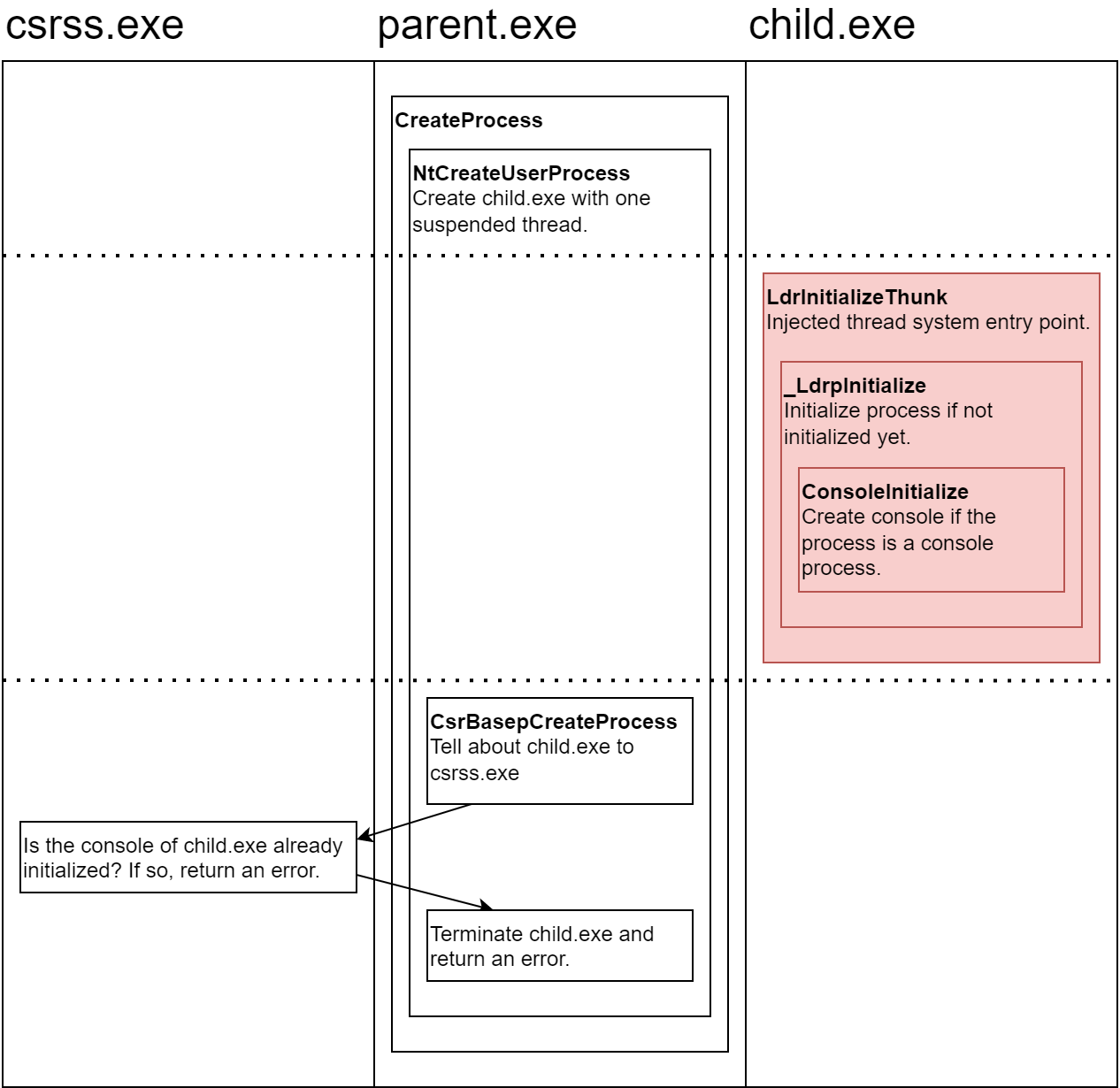 To overcome this and other potential problems caused by the early injected thread execution, I switched from creating a new thread with CreateRemoteThread to queuing an APC (Asynchronous Procedure Call) in cases when the process didn’t start executing yet. For a great technical blog post about APCs check out APC Series: User APC API by Ori Damari. A couple of notes about the implementation:

But how does the injection program know whether the process started executing (and then CreateRemoteThread is used as before) or not (and then an APC is queued)? It checks whether there’s only a single thread, and if so, whether it’s suspended with the instruction pointer at RtlUserThreadStart. In that case it concludes that the process didn’t start executing and queues an APC instead of creating a remote thread.

The next thing I noticed is that the DLL wasn’t getting injected into processes of UWP apps such as Windows Calculator. The code to load the DLL was being injected successfully, but the DLL failed to load with ERROR_ACCESS_DENIED. The problem was that UWP apps have limited access to the filesystem and they didn’t have permissions to load the DLL. Changing the DLL file permissions fixed this issue. For example, the following commands can be used to change the DLL file permissions such that UWP apps are able to load it:

Another problem was that a mutex can’t be shared between the injection program and UWP apps by using the same mutex name. UWP apps are sandboxed, and each UWP app has its own object directory. A UWP app can’t refer to objects outside of its object directory by name. I was able to overcome this limitation by using the little-known private namespaces API. For a great overview of named objects in Windows, including the UWP sandboxing and private namespaces, check out the blog post A Brief History of BaseNamedObjects on Windows NT by James Forshaw.

Another case in which the DLL wasn’t getting injected into processes was for processes with a mitigation policy that restricts image loading to images that are signed. On my test Windows 10 machine there were two such processes: fontdrvhost.exe and svchost.exe which hosts the DiagTrack service (diagtrack.dll). 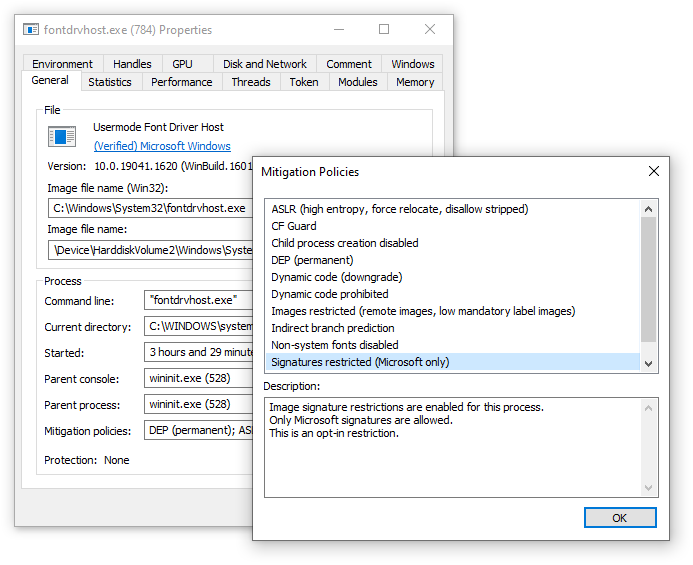 Similarly to the UWP case, the code to load the DLL was being injected successfully, but the DLL failed to load, this time with ERROR_INVALID_IMAGE_HASH. But unlike the UWP case, there’s no straightforward workaround. I could try and use reflective DLL injection (manually loading the DLL from memory), but I didn’t bother since it complicates the solution and might have pitfalls for the little benefit of being able to customize programs which are not very interesting anyway.

I was OK with not being able to customize programs with this mitigation, but this limitation had an unpleasant side effect. In some cases, Windows was displaying a system error when the DLL loading failed: 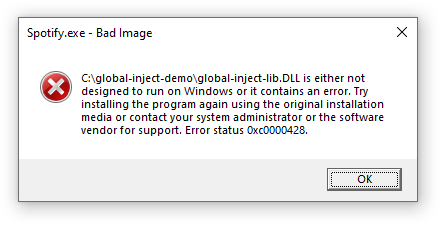 The system error can be reproduced by running the following program and then running the injection program:

After some investigation, I found that this behavior can be controlled with the SetErrorMode, SetThreadErrorMode WinAPI functions. I used SetThreadErrorMode to turn off the critical-error-handler message box while trying to load the DLL.

After handling all of the limitations above, the solution felt pretty solid and I didn’t encounter any other problems. But after using the computer with it for a while, I noticed that it takes noticeably longer for some programs to launch. The reason for this was that MinHook, the hooking library that I used, enumerates all the threads on the system and looks for threads that belong to the current process to suspend them. Enumerating all system threads can be very slow, on my system it took more than 300 milliseconds. I improved this by doing the following:

You can find the code that enables this in my MinHook multihook branch. Among other changes the branch has is the ability for a function to be hooked more than once. In general, I found that reliable function hooking is more tricky than it might seem at first. For example, consider what happens if a DLL sets a hook and then needs to be unloaded. When is it safe to unload it? Can you be sure? But that’s a topic for another post.

An implementation that handles all the limitations mentioned in this post can be found here. I’m pretty satisfied with the result. I’ve been using my computer with Windhawk, which uses this global injection and hooking implementation, for several months, and I didn’t experience any stability, performance, or any other problems. I hope that Windhawk will prove itself as a reliable tool for customizing Windows programs, and I invite you to try it out.